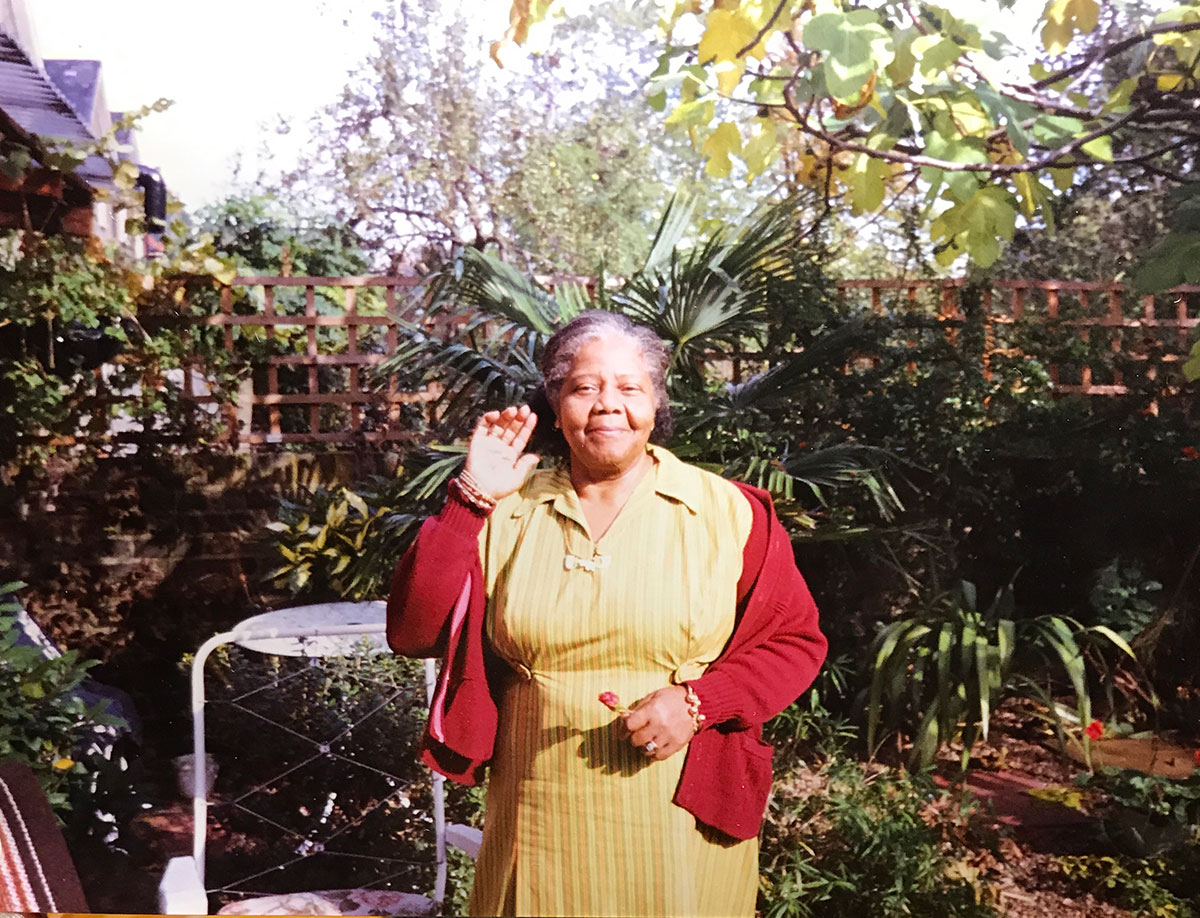 Sybil Phoenix in her garden in Brockley, her favourite place to be!

It’s a real challenge and honour to write about a 94-year-old woman who is very much alive and kicking today and who has, it seems, already lived at least 9 lives within this time!

Sybil Phoenix is a woman who has helped transform literally thousands of lives, and who makes a lasting impact on all whom she meets, which despite her taking it in her stride, has included royalty, political and other world leaders, religious leaders, senior diplomats, leading academics, Brockley neighbours, Goldsmiths’ students, local school children, and of course her own four children and extended family, which warmly receives new members each year. There are so many things that Sybil has achieved that are within the public domain; however there is so much more to which she has contributed. Achievements that remain hidden mainly due to the acceptance of her life’s duty to be in the service of others. I would like to recount a few of these achievements amongst the more commonly known ones.

Sybil Phoenix was born Mavis Marshall at Public Hospital Georgetown, Guyana on 21 June 1927. As a result of her mother's death before she was 10 years old, she lived with her aunt and trained formally as a seamstress developing a real entrepreneurial flair. The owner of Sunset Sports Wear and Leather Goods business in Guyana, Sybil designed, made and sold shirts, sportswear and handbags before leaving for the UK in 1957. Her considerable skill as a seamstress was used again in England to support her early unpaid fostering work. Phoenix Afro-European Fashions (a unique dressmaking school which led to glamorous African fashion shows being held across London including at the Savoy Hotel), was established in her home in Tressillian Road in the early 1970s. Sybil married Joseph Nathaniel Phoenix at Shepherds Bush Methodist Church in 1958 - their mutual drive for self sufficiency and self determination bringing them together when Joe worked in a bookstore and sold books to Sybil.

Her charitable spirit and desire to help other people spans move than 60 years. As a child who realised that her family had supplies such as coal, soap, oil, cakes and bread in excess, Sybil would not only barter them for other goods but would give them to those less fortunate than her. As a 17-year-old secretary for the African Episcopal Zionist Church, Sybil had early first-hand experience of some of the difficulties and poverty families can face. She supported her pastor in the provision of local welfare, giving families access to the pastor as well as administering welfare decisions to families in need. She also started the Rugged Morning Sunday School through this church - children did not need shoes to attend (as they were difficult to come by for some families) - they only had to have coconut oil on their feet and Sybil saw to it that it was in plentiful supply!

Those who have heard Sybil sing usually realise that she has a voice of some power and control and that she displays no fear in providing an appropriate rendition to illustrate her point. As a trained classical singer, Sybil travelled from Guyana to America to sing with international orchestras and it was this and the opportunity to work as a youth worker that started and sustained to this day her involvement and commitment to the Methodist Church. Trained at 18 years as a youth worker by the British Council of Churches, Sybil also worked as an Assistant Minister in Clubland, Georgetown Guyana, which was run by the Methodist Church. Her church-based work and connections in Guyana provided useful links and on arrival in the UK, Sybil worked in Walworth Methodist Church which also had a Clubland, providing hostel accommodation for boys and young men as well as schooling and social activities which aimed to get boys off the street and into a recognised trade.

Sybil has never lost sight of the help that is needed "back home" in Guyana, and has continued to support the baby incubator project in the hospital of her birth in Georgetown, a computer project at St Stanilaus College, and a children's outreach feeding project in Grace Pentecostal Church.

Sybil started fostering in 1962 and within the first ten years she had fostered over 100 girls and young women. She is unable to recount the total number of children she has fostered but to her this does not matter – championing the cause of the vulnerable and those whose voice cannot be heard is her over-riding intention. The Marsha Phoenix Memorial Trust is one of the most high-profile aspects of her work and although it provides the focus of our attention, I would like to take this as an opportunity to acknowledge and celebrate Sybil Phoenix’s contribution to people in need over more than 60 years!

Some of the many qualities that makes Sybil special, can be seen in her role as pioneer and an agent of change. From her famous ‘Yellow Paper’ that radically changed the understanding of and approach to Race Relations within the Methodist Church, to the building of the Pagnell Street Centre in New Cross, home to the Moonshot Youth Club and the first purpose-built black community centre in the UK. Her tireless fight to re-open investigations into the New Cross Fire and her unwavering support of the survivors; or in her numerous local, regional, national and international activities through the Council of Churches; Sybil’s vision, determination, ability to mobilise others, love, kindness and compassion for others, plus her mischievous sense of humour and her unwavering belief that all things are possible through God is an inspiration to us all.

We have highlighted some of her achievements over the past 60 years – the rest of ‘Sybil’s story’ is for another day. I am privileged to be the guardian of a very small section of it and I am sure you will all have your own contributions as well. When eventually all joined together in one place and at one time, what a remarkable and rich story it will make.

Mrs Sybil Phoenix, MS, MBE, OBE; Methodist Minister; Freeman of the City of London, Freeman of Lewisham; Fellow of Goldsmiths College, University of London; Former Mayoress of Lewisham; Honorary President of The National Council of Women in Great Britain; Vice President of the Commonwealth Youth Council - to name just a few of your associations - we acknowledge and salute your achievements, your spirit of generosity and your wonderful capacity for love.